After breakfast visit Gandan Monastery. Drive west to Högnö Han Mountain (4-5 hours) which is a splendid and a magnificent giant rock formation is situated in the middle of steppe where is border area of Uvurkhangai, Tuv and Bulgan province with forests, steppes, Gobi-type desert and mineral water sources. We will stay at an eco-camp out of nowhere in the silent beautiful nature. Here we will have some discussion about Buddhism with a monk.

This morning we will visit small Erdenehamba Monastery, now being restored. It was destroyed during the purges of the 1930s. We will explore the area on foot today. It is possible to hike a short way until Övgön Monastery ruin, originally built in 17th century by Saint Zanabazar who was a great sculptor and the biggest representative of Buddhism in Mongolia, but destroyed by Galdan Boshigt and assassinated all the monks.

We will have some talk with the monk and practice meditation in the silent nature over here.

Some who are interested available to have a scenic 3 hour walk back to the camp hiking over the Hongno Han mountain ridge or easily drive back.

AM. We will drive for around 2 hours to Harhorin (or Kharkhorum) which was the oldest capital city of Mongol Empire, started building by Chinggis Khaan in 13th century and which is located on the most important east-west route across Mongolia in the Valley of Orkhon River-UNESCO World Heritage Site. We will visit an impressive small Kharakhorum archeological museum exhibits dozens of artifacts dating from 13th and 14th centuries which were recovered from sites of the city.

Proceed to visit Erdenezuu Monastery which is the earliest and most magnificent monastery complex in Mongolia, was built at the base of Kharkhorum city in late of 16th century.

The monk will be stand by for more information.

Full day drive toward Saikhan Ovoo. It’s will not be continuously driving all day long. We will visit Shanh temple is one of the only survived and oldest temples out of the purge on the way. After some driving we will visit a nomad family camping in a beautiful valley for summer while having some unjoyful break.

Arrive at the camp late afternoon and have rest in your comfortable ger.

Today we will explore around the area. Visit the Ongi temple ruins where once 17 temples located and 200 monks resided around 18th century. This monastery was one of the largest and most respected monasteries in Mongolia before its destruction by the communist authorities.

Overnight at the same camp (B,L,D).

After breakfast drive for 4 hours to Bayanzag. Location named “Flaming Cliffs” by Roy Chapman Andrews, whose expedition found first ever fossilized dinosaur eggs in the 1920s. Discover the Flaming Cliffs in Bayanzag where red and orange hues come together to create an awe-inspiring sight. Home to ancient dinosaur fossils, the Bayanzag area is an exciting destination allowing you to get up close to massive dinosaur remains. Spend the night in a comfortable ger camp.

Proceed the tour driving for 4-5 hours the east through the mountains and reach the largest sand dunes in Mongolia Hongor Sands in the afternoon. Visit the massive dunes and ride Bactrian camels. Overnight at a camp (B,L,D).

Travel to the Gurvansaikhan Mountains and keep your eyes peeled for spectacular wildlife (4-5 hour drive). The snow leopard, the Siberian ibex and the Argali sheep are all local residents around the area. Overnight at a c amp (B,L,D).

Full day excursion to the Yol Valley and its deep ravine, which is often blanketed with snow and ice. Bird watching is rewarding here as you are sure to see the Bearded Vulture, also known as the Lammergeier, soaring around the ravine.Yol is the mongol word for this large bird. There are also several species of Rose Finch, and usually also the Wallcreeper (Tichodroma muraria).

Overnight at the same camp (B,L,D).

Transfer to Dalanzadgad airport and fly 1½ hours, flight to Ulaanbaatar by domestic airline. Arrive at the airport and transfer to the hotel. In the afternoon, visit Choijin Lama Museum.

The summer flight schedule is not set yet, but is likely to be a choice of morning and evening flights.

Overnight in a hotel (B, L)

A.M transfer to the airport and depart back home. 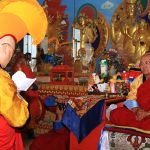